Interim CEO
David F. Grant – Chairman of the Board, Director Mr. Grant has served as Chairman of the Board of California Nanotechnologies Corp, as well as CEO of Omni-Lite Industries. Prior to founding Omni-Lite, Mr. Grant spent 15 years working in the aerospace industry in various management capacities in the areas of marketing and business development. 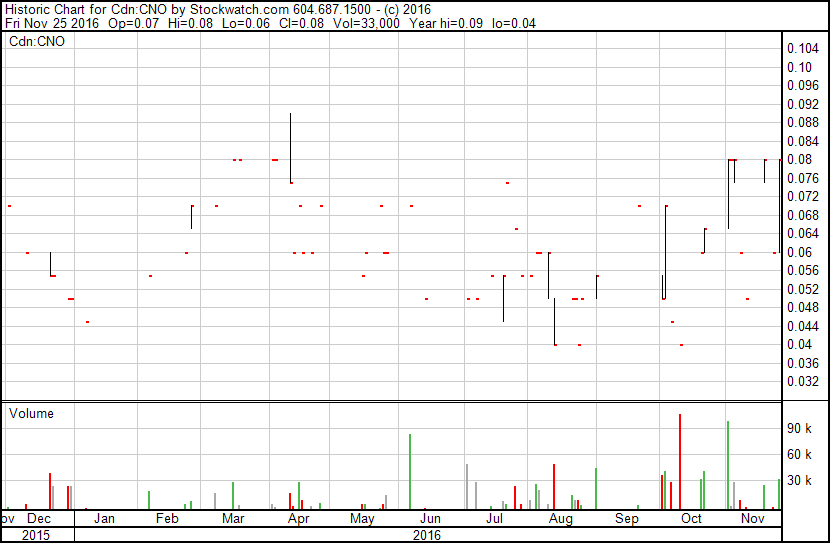 Mr. David Grant reports
CALIFORNIA NANOTECHNOLOGIES ANNOUNCES RECORD Q3 AND EVALUATES PLANS TO PURCHASE LARGE SPS UNIT
California Nanotechnologies Corp. had quarterly revenue of approximately $260,000 (U.S.) for the period of Sept. 1, 2016, to Nov. 30, 2016, an increase of 81 per cent from the prior period. Revenues for the fiscal year to date are approximately $465,000 (U.S.). This is an increase of 41 per cent from the prior period. For the nine-month period, 57 per cent of these revenues are in the spark plasma sintering (SPS) division, 25 per cent are in the sports and recreational division, and 18 per cent are in the research and energy division.
In order to best support the company’s growing base of Fortune 500 customers, while providing additional sustainable long-term revenues, California Nanotechnologies is in the final stages of evaluating the purchase of a large SPS sintering and consolidation system. This unique technology will allow the company to manufacture near-net-shape parts at a diameter eight times larger than its current system, and will provide a critical capability to support large production programs as required by the new microchip manufacturing customer and other large high-tech component designers and fabricators. “As a cousin to 3-D printing, the field of SPS continues to grow rapidly worldwide, and this large machine will greatly aid our ability to provide commercial products on a sustainable basis,” stated Eric Eyerman, chief operating officer. "Also of particular note, the company is making steady progress on the development of the technology required in the program for the major microchip manufacturer."
Mr. Eyerman has been promoted to COO effective Dec. 1, 2016. Mr. Eyerman is a chemical engineer from Rutgers University in New Jersey.

“Of particular significance, in mid-January, 2017, the company delivered the first working prototype to its wafer fabrication customer for testing and evaluation,” stated Eric Eyerman, chief operating officer. “This product was delivered ahead of schedule. This milestone is critical to proceeding with phases 2 and 3 of this important program. Based on this success, the company has committed to procuring the large SPS required for the production phase of this and other large programs. The company is in the process of completing the documentation to facilitate this transaction.”

“In the third quarter, the company continued to generate increasing amounts of cash from operating activities. In this period, cash flow provided from operating activities increased to $22,999 (U.S.) from $12,809 (U.S.), an increase of 80 per cent from the prior period,” stated David Grant, chairman. “These results are leading the company toward sustainability. To provide for increased visibility in the United States, the company has made an application to trade its securities on the OTCQB market.”

•Company approved for Bluesky Publication in US

LOS ANGELES, March 06, 2017 (GLOBE NEWSWIRE) – California Nanotechnologies Corp. (TSX-V:CNO) (“Cal Nano” or the “Company”) is pleased to announce record revenue for fiscal year 2017, which ended February 28th, 2017, of approximately $560,000 US. This is an increase of approximately 30% from the preceding fiscal year. In F2017, 55% of these revenues were in the Spark Plasma Sintering (“SPS”) division, 28% are in the Sports and Recreational division, 14% are in the Research and Energy division, and 3% are in the Aerospace division. “The SPS division represents the ‘powder to part’ technology being developed by the company,” stated David Grant, Chairman and Interim CEO. “This division represents the fastest growing technology at Cal Nano and will require the most significant investment in the near future.”

“Of particular significance, in mid-January 2017, the Company delivered the first working prototype to its tier one semiconductor design and fabrication customer for testing and evaluation,” stated Eric Eyerman, COO. "This milestone was critical to proceeding with phases 2 and 3 of this important program. Based on this success, the Company has finalized the purchase of a large SPS required for the production phase of this and other large programs.”

This large SPS unit is scheduled to be delivered in the fall of 2017. “This major investment will increase the Company’s production capabilities significantly and will be a major asset in supporting several growing projects, including the program with a major tier one semiconductor design and fabrication company. If phase 2 of the semiconductor program is approved, we anticipate strong revenue growth in F2018.” stated COO Eric Eyerman.

The company has been notified that its application for Bluesky Exemption (as provided by Mergents in the US) has been approved and is scheduled to be published in the Mergent Manuals and News Reports dated March 7, 2017. 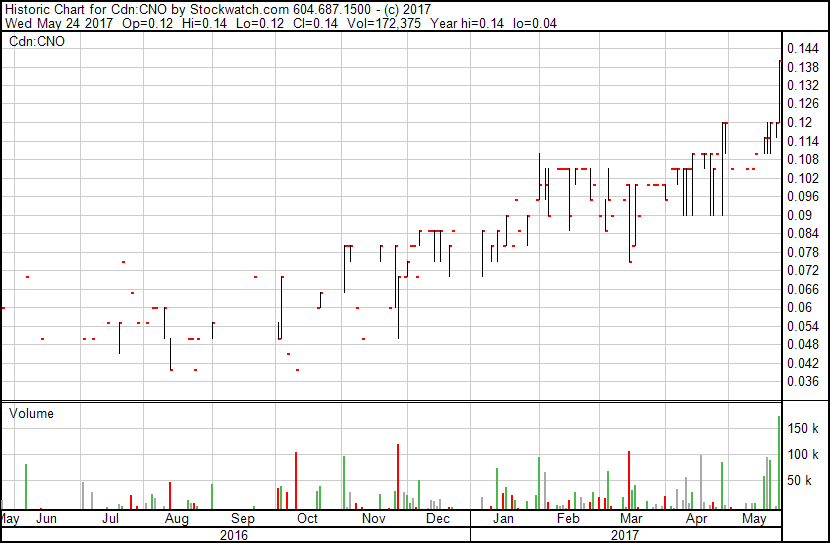 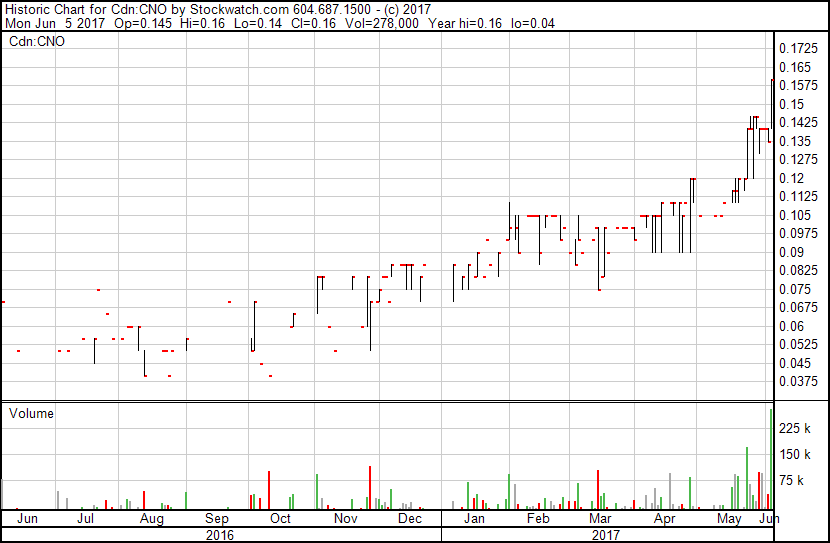 Mr. David Grant reports
CALIFORNIA NANOTECHNOLOGIES REPORTS PROGRESS ON PROGRAM WITH CHIP FABRICATOR AND EARLY DELIVERY OF LARGE SPS FROM JAPAN
California Nanotechnologies Corp. had revenues of $116,723 (U.S.) in the first quarter, just completed on May 31, 2017, an increase of 21 per cent over the first quarter of the prior year. In addition the Company posted net income of $12,001, the second time the Company has reported a positive net income. “As the Company broadens its customer base, adds the large production SPS this month and takes on larger projects with its Fortune 500 customers, reaching the point of sustainability and long term growth become feasible targets,” stated Eric Eyerman, COO. In particular, the addition of the large SPS is attracting world class customers such as the US National Laboratories and 3M."
The Company has completed Phase1A for its large microchip fabrication customer with the delivery of several additional working prototypes for further testing and evaluation. If successful, the Company could move into Phase 2 of the program in September, 2017.
SUMMARY OF THREE MONTH FINANCIAL HIGHLIGHTS (US $)

All figures are in U.S. dollars.

(1) Cash flow from (used for) operations is a non-GAAP term requested by the oil and gas investment community that represents net earnings adjusted for non-cash items including depreciation, depletion and amortization, deferred taxes, asset write-downs and gains (losses) on sale of assets, if any.

« We are excited to start work on our first investor relations program as we continue to execute our long-term growth plan, » stated Eric Eyerman, CEO of Cal Nano. « With the milestones we have executed in the last year, we feel it is an appropriate time to start being more present in the investment community and build further confidence. Brandon at Otis IR will play an important role in supporting us in this journey as we leverage his expertise in microcaps. »

« Cal Nano has impressed me with their recent traction in deploying their novel technologies into new markets with meaningful commercial contracts, » said Brandon Chow, Principal & Founder at Otis Investor Relations Inc. « As the world looks toward next generation materials in aerospace, automotive and renewable energy, I expect that Cal Nano will benefit from these tailwinds. I am excited to leverage my past success in executing investor relations programs for technology-driven microcaps with Eric and his ambitious team. »

Pursuant to the Agreement, the Company will pay Otis IR a monthly fee of US$2,525, plus applicable taxes and reasonable expenses, on a month-to-month basis. The Agreement remains in effect until either party terminates the Agreement by providing the other party 30 days’ prior written notice of termination.

As additional consideration for the services, the Company has agreed to grant 110,000 stock options at an exercise price to be determined by the Company at a future date and will vest in quarterly instalments over a 12-month period. All stock options are subject to the terms and conditions of the Company’s previously approved Stock Option Plan and approval by the TSX Venture Exchange.

The Agreement is subject to the regulatory acceptance by the TSX Venture Exchange. 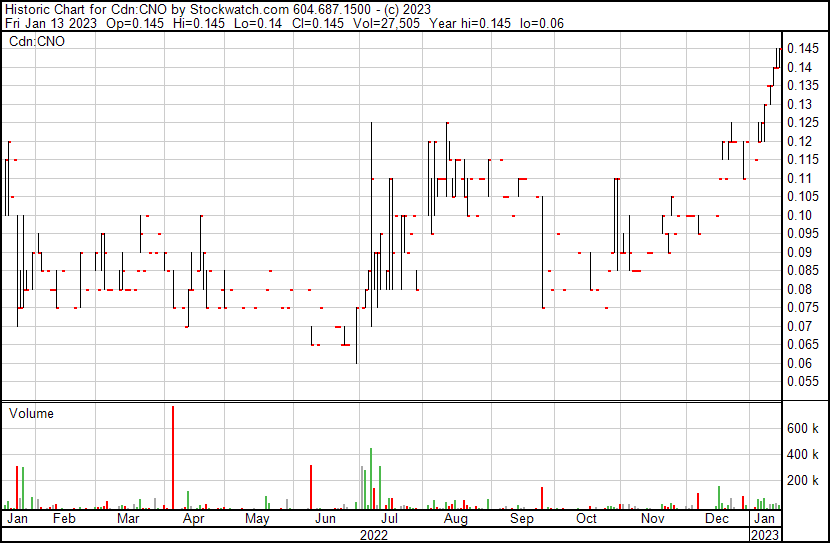