“The world needs safer anti-inflammatory drugs, and we are pleased to have secured Antibe’s innovative portfolio for our territories. We have come to know their management team and are also pleased to provide financial support for their strategic thrust into regenerative medicine”, said Jonathan Ross Goodman, President and CEO of Knight. 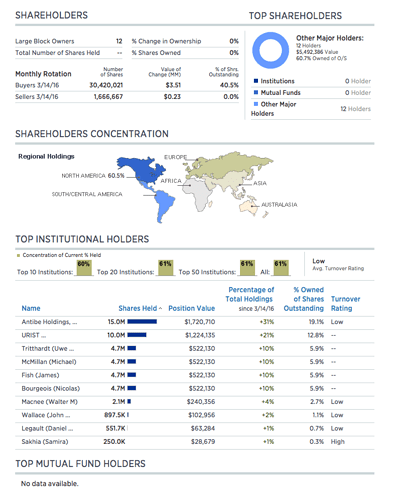 The only place for free North American stock rankings incorporating insider commitment. Get stock quotes, news, fundamentals and easy to read SEC and SEDI insider filings. Home of the insider insights newsletter and the Canadian Insider Club which...

The only place for free North American stock rankings incorporating insider commitment. Get stock quotes, news, fundamentals and easy to read SEC and SEDI insider filings. Home of the insider insights newsletter and the Canadian Insider Club which...

Antibe to have Phase 2 pain data by third quarter
http://biotuesdays.com/2016/06/21/antibe-to-have-phase-2-pain-data-by-third-quarter/

Antibe Therapeutics Announces the Appointment of New Board Member and Provides Update on Phase 2 Trial of ATB-346
JULY 19, 2016
http://www.antibethera.com/2016/07/19/antibe-therapeutics-announces-the-appointment-of-new-board-member-and-provides-update-on-phase-2-trial-of-atb-346/

A Knight is Reborn
https://ca.finance.yahoo.com/news/knight-reborn-120000832.html

Business Wire September 22, 2016
TORONTO–(BUSINESS WIRE)–
Antibe Therapeutics Inc. (“Antibe”) (TSXV: ATE, OTCQX: ATBPF), a commercial-stage pharmaceutical growth company, continues to demonstrate the anti-cancer potential of its lead drug, ATB-346. In a separate study earlier this year, ATB-346 was shown to be very effective in reversing colon and intestinal tumour growth in mice. Further to this study, a new publication has shown promising results in the chemoprevention and treatment of melanoma in mice. Melanoma is one of the most drug-resistant and invasive types of cancer, and both the incidence and mortality rates are increasing.

“Although we remain focused on our ongoing human studies to advance ATB-346 as a treatment for pain and inflammation, we have compelling data from studies of colon cancer and now melanoma,” commented John Wallace, Chief Scientific Officer of Antibe. “We are encouraged by these preliminary data and plan to continue this research in support of the potential advancement of ATB-346 into selected cancer indications.”
In the new publication, Dr. Angela Ianaro’s laboratory at the University of Naples (Italy), in collaboration with Dr. Wallace, examined the possibility that ATB-346 may have greater beneficial effects in terms of reducing melanoma than naproxen, the most-prescribed nonsteroidal anti-inflammatory drug (“NSAID”) in the USA. NSAIDs have been shown to reduce tumour growth, but they also cause significant gastrointestinal bleeding. In contrast, ATB-346 has been shown to be GI-safe in animal studies.
The effects of ATB-346 were first compared to naproxen in an in vitro melanoma model, and was found to be much more effective. The investigators then implanted melanoma cells into mice, and monitored the growth of tumours. Treatment with naproxen had a modest beneficial effect, reducing tumour volume by 23% and tumour weight by 20%. In contrast, treatment with an equivalent dose of ATB-346 was 3-times more effective, reducing tumour volume by 69% and tumour weight by 61%. Mechanistic studies confirmed that ATB-346 was more effective in promoting death (apoptosis) of cancer cells.
The article was published online in the September issue of the journal “Pharmacological Research” and can be found at: www.sciencedirect.com/science/article/pii/S1043661816304467

Celebrity molecules promised to transform our health, but haven't always lived up to their billing. ![Figure][1] Hydrogen sulfide's short career as a panacea ended one day in 2011. Ikaria, a company founded 6 years earlier to develop medical...

« The H2S-releasing compounds that have reached clinical trials reflect more down-to-earth goals. One drug, developed by Antibe Therapeutics of Toronto, Canada, pairs naproxen, a nonsteroidal anti-inflammatory drug (NSAID), with another molecule that emits H2S. Popular painkillers, NSAIDs can cause gastrointestinal (GI) problems such as bleeding. The hope, says pharmacologist John Wallace, Antibe’s founder, is that the gas will quell these side effects. “A GI-safe NSAID has great potential,” he says. In August, the company announced positive results from a phase II trial of the drug in people with knee arthritis. »

Business Wire October 11, 2016
TORONTO–(BUSINESS WIRE)–
Antibe Therapeutics Inc. (“Antibe”) (TSXV: ATE, OTCQX: ATBPF), a commercial-stage pharmaceutical growth company, today announces that its subsidiary Citagenix Inc. (“Citagenix”) is launching a strategic initiative to drive growth of product sales in the U.S. market for dental biologics. Citagenix recently hired three senior-level sales directors with a wealth of industry experience who will be responsible for managing and executing this strategy.
“We are very excited to announce the addition of these deeply experienced sales professionals to the Citagenix team as we embark on our growth strategy in the United States,” said Dan Legault, Antibe’s CEO. “This initiative strengthens Citagenix’s ability to compete and grow market share in this important market, and we expect it should contribute materially to profitability in a few quarters.”
The new sales directors collectively have 65 years of experience in selling and promoting biologics and medical devices in the United States, bringing valuable customer relationships that Citagenix can leverage immediately. In addition, this new sales team will be responsible for engaging and supporting new distributors and independent representatives in key regions across the United States. The strategic initiative will also involve additional product development efforts and enhanced marketing and systems support.
According to iData Research, the U.S. market for dental bone graft substitutes and other dental biomaterials was US$341 million in 2014, representing the largest global market for oral regenerative medicine.
About Antibe Therapeutics Inc.
Antibe develops safer medicines for pain and inflammation. Antibe’s technology involves linking a hydrogen sulfide-releasing molecule to an existing drug to produce a patented, improved medicine. Antibe’s lead drug ATB-346 targets the global need for a safer, non-addictive drug for chronic pain and inflammation. ATB-352, the second drug in Antibe’s pipeline, targets the urgent global need for a non-addictive analgesic for treating severe acute pain, while ATB-340 is a GI-safe derivative of aspirin. www.antibethera.com.
Antibe’s subsidiary, Citagenix Inc. (“Citagenix”), is a leader in the sales and marketing of tissue regenerative products servicing the orthopedic and dental marketplaces. Since its inception in 1997, Citagenix has become an important source of knowledge and experience for bone regeneration in the Canadian medical device industry. Citagenix is active in 15 countries, operating in Canada through its direct sales teams, and internationally via a network of distributor partnerships. www.citagenix.com.
Forward Looking Information
This news release includes certain forward-looking statements, which may include, but are not limited to, the growth of product sales, engaging new distributors and independent representatives and the size of the market for dental biologics. Any statements contained herein that are not statements of historical facts may be deemed to be forward-looking, including those identified by the expressions “will”, “anticipate”, “believe”, “plan”, “estimate”, “expect”, “intend”, “propose” and similar expressions. Forward-looking statements involve known and unknown risks and uncertainties that could cause actual results, performance, or achievements to differ materially from those expressed or implied in this news release. Factors that could cause actual results to differ materially from those anticipated in this news release include, but are not limited to, the Company’s ability to secure additional financing, its ability to execute its business strategy and successfully compete in the market, and risks associated with drug and medical device development generally. Antibe Therapeutics Inc. assumes no obligation to update the forward-looking statements or to update the reasons why actual results could differ from those reflected in the forward-looking statements except as required by applicable law.
View source version on businesswire.com: http://www.businesswire.com/news/home/20161011005583/en/

Opiates, such as oxycontin and fentanyl, are among the most widely used drugs to relieve acute, severe pain, with annual sales exceeding US$7 billion. However, these drugs carry a high risk of addiction and abuse. As earlier announced, Antibe is developing ATB-352, a novel hydrogen sulfide-releasing analgesic, to address the growing need for a powerful but safe and non-addictive pain-killer.

ATB-352 reduces pain by very potently suppressing production of pain-signaling substances called “prostaglandins”. The drug is rapidly absorbed and shows a pharmacokinetic profile consistent with once-daily dosing. ATB-352 is a derivative of ketoprofen, a powerful analgesic that carries a high risk of producing gastrointestinal ulcers. However, in animal studies, ATB-352 did not cause ulcers or bleeding, even when given at high doses daily for 5 days. Small amounts of hydrogen sulfide released from ATB-352 protect the lining of the GI tract, and provide additional analgesic and anti-inflammatory effects.

John Wallace, Antibe’s Chief Scientific Officer, remarked, “ATB-352 is intended for short-term use in relieving severe pain, such as that associated with migraine, toothache, sports injuries, post-surgery, dysmenorrhea, and a variety of other conditions. Because of the intended short-term use, the development plan for ATB-352 is considerably accelerated as compared to that for a chronic-use drug, such as ATB-346, Antibe’s lead drug being developed for the treatment of arthritis.”

“Insiders of the Corporation and their affiliates subscribed for 1,300,000 Units under the Offering for aggregate cash consideration of $195,000.”